In a posthumously published book, Pensées (“Thoughts”) Pascal posits that all humans must bet that God exists or that God does not exist. He then ventures into a field of philosophy known as “Christian Apologetics” which attempts to defend Christian beliefs using reason rather than faith.

In simple terms, Pascal asks us to consider the question of God’s existence as a wager. He asks us to assume that we must place our bet; it is not optional. Therefore, we must look at the gain or loss inherent in each side of the bet.

In statistical theory (not yet invented in Pascal’s time), he is talking about the consequences of making a Type I or a Type II error. In statistics, the “null hypothesis”—the hypothesis that something does not exist, is always the hypothesis tested because science does not accept anything as true until it has been proven to be true.

It is easy to see from this chart that the safe bet is to bet that God does exist. If there is no God, you lose or gain nothing no matter how you bet. If there is a God, you win Heaven if you are correct and you go to Hell if you are wrong. The rational choice is to bet that God exists. Pascal concluded that If you do not believe, you should seek to “cure yourself of disbelief.”

If only it were so simple. Unfortunately, this simple wager fails to consider many logical fallacies and false assumptions. Here are a few of them.

1. Is it possible to cure yourself of disbelief?

Can someone just say, “OK, I believe” and abracadabra, he is a believer? I think not. If you do not believe, you could try to persuade yourself to believe, for instance, talk to people who do believe, read books on the subject, etc., but if you remain unconvinced, you cannot force yourself to believe. There are many different religions each with their own idea about God.

2. Which God should you believe in?

Pascal is clearly biased—he wants us to believe in the Christian God. However, throughout history and even in modern times, there have been thousands of different religions, each with different ideas about the identity of God. Some religions believe that there is more than one God. If you choose the wrong God, will the “real God” be angry with you? If you choose one of a multitude of real gods, will the other gods be mad at you for not choosing them?

Some religions, like the Mormon religion, are relatively new (founded in 1830). You have to ask yourself, “Why did God wait so long to reveal Himself?”

Since you cannot force yourself to believe, should you pretend to believe? Can you fool God? Can you lie to God?

Since God is described as all-knowing, pretending to believe is not going to do you any good. In fact, your lie might make God angry at you. As I understand it, God does not like the “bearing of false witness.” A stained glass window reminds me of the pros and cons of belief. | Source

4. Is there really no cost to belief, even if you are wrong?

If you sincerely believe, there are some benefits during your earthly life.

However, there are costs to belief ,even if you are a sincere believer, if it turns out that you are wrong about the existence of God.

There are also costs due to an acceptance of non-rational thinking (“magical thinking”).

5. Is there really no cost to pretending to believe?

If you are a non-believer pretending to believe, you can enjoy some benefits from this.

On the negative side, a non-believer may pay psychological costs if he forces himself “to live a lie.” He may be forced to do things he does not want to do. Can someone be a good person without a belief in God? | Source

Most people are moral regardless of whether they believe in the existence of God (or gods or goddesses). They are moral because it really is true that virtue is its own reward. It is a simple as this: If you lie, steal, cheat, you will feel bad about yourself and you will be socially isolated. Most people have a conscience that prods them to be good.

Additionally, there are civil laws that keep negative tendencies in check among those with insufficient inherent morality. Our laws do not derive from religion. Our laws go all the way back to prehistoric times. The first known codification of civil laws goes back to The Code of Hammurabi in Babylon, in 1754 BCE.

Do you really think that not having a belief in God turns people into thieves, rapists, and murderers? Many people who are devout–pedophile priests and hypocrite preachers come to mind—do immoral things.

Most atheists, just like most believers, are law-abiding and moral people. There are some atheists who are not good people, but their bad behavior has nothing to do with their non-belief.

Finally, can you really say someone is moral if the only reason for their good behavior is a fear of punishment, whether by the civil authorities or by God?

7. Will God really punish the non-believer?

Christopher Hitchens (1949-2011) was a well-known writer and atheist. He often took part in public debates with Christians. I was present at one of those debates. He was asked what he would say if he discovered after his death that God does exist after all and he was now going to be banished to Hell as punishment for his sin of disbelief. He replied, “I would say why did you not provide sufficient proof of your existence? Why did you give us reason, if you did not want us to use it?” In other words, he did not believe that a just God would punish someone for disbelief.

Do you also find it hard to believe that a just and loving God would punish a person who led a good life simply for not believing in His existence or for not worshipping Him. Could God be that petty?

I have always thought it was very self-serving hen some churches say you can’t get to heaven by good works, but only from accepting Christ as your savior. Convenient isn’t it? You have to join their church to get to Heaven.

Read more on the subject of belief and disbelief. 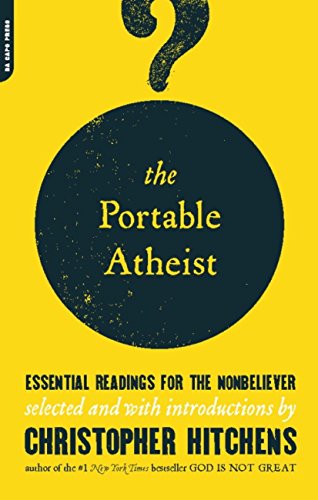 The Portable Atheist: Essential Readings for the Nonbeliever

Christopher Hitchens takes us on a provocative and entertaining guided tour of atheist and agnostic thought through the ages. Excerpts from the work of philosophers, scientists, and more (even clergy) from ancient times to modern days are presented with commentary. It is essential reading for anyone who wants to understand atheism.

In conclusion, Pascal’s wager is not a good bet.

Having used my reason to evaluate the pros and cons of this bet, I have concluded that it is not a good bet. It is more advantageous to be a non-believer than to be a believer. Of course, you may use your reason and come to a different conclusion. I did not write this essay to “convert” anyone to belief or disbelief. I am fortunate to live in a country which provides freedom of religion which gives everyone one the right to believe, or not believe, as they choose.

One last point. Pascal’s writings about this wager were published after his death. The argument about the wager was found among his notes. I like to think that this wager may have just been some musings that upon further reflection, he might have set aside because he, himself, recognized the faults in his logic.